View cart “Wild Democracy (Vol III)” has been added to your cart.

In our age of overconsumption, Henry Thoreau’s fiery criticisms of consumer culture and his poetic defence of simpler living have never been more relevant or necessary. But Thoreau is not an easy writer to read. His sentences are often very dense and his ideas are often challenging and provocatively expressed. For these reasons the casual reader can be easily put off. But his perspectives are too important to miss.

This concise introduction provides a deep but accessible overview of Thoreau’s philosophy of voluntary simplicity.

‘Just Enough Is Plenty is a superb introduction to Thoreau’s life and ideas, written with clarity and style by a leading exponent of Thoreau’s economics of voluntary simplicity. Samuel Alexander expertly guides the reader through the often difficult terrain of Thoreau’s economic ideas, highlighting the opportunities for living simpler, freer lives. The result will help a new generation of readers understand Thoreau’s essential message – and apply it to their own lives. The benefits of doing so are potentially immense.’ – Philip Cafaro, author of ‘Thoreau’s Living Ethics’

Be the first to review “Just Enough is Plenty” Cancel reply 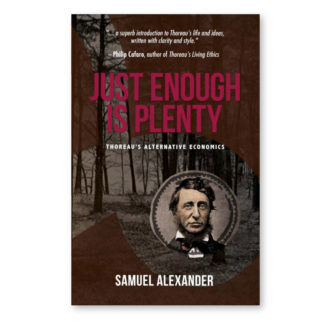