Toward an Aesthetics of Degrowth
By Samuel Alexander

What role might art need to play in the transition beyond consumer capitalism? Can ‘culture jamming’ contribute to the necessary revolution in consciousness? And might art be able to provoke social change in ways that rational argument and scientific evidence cannot?

In this stimulating new book, degrowth scholar Samuel Alexander explores these questions, both in theory and practice. He begins with a novel theoretical defence of art and aesthetic interventions as activity that is necessary to effective social and political activism, and concludes by presenting over one hundred ‘culture jamming’ artworks from a range of contributors that challenge the status quo and expand the horizons of what alternatives are possible.

Available as a physical book in an abridged, image-based version called ‘Compost Capitalism: Art and Aesthetics at the End of Empire’ .

Be the first to review “Art Against Empire eBook” Cancel reply 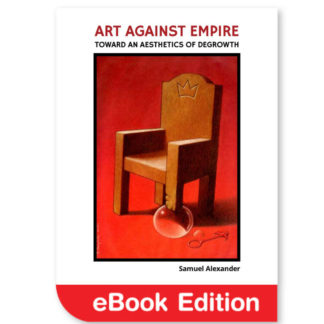